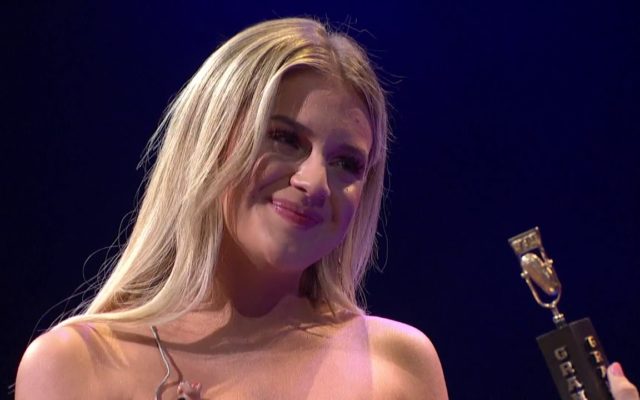 “This is one of the coolest nights of my entire life,” Kelsea Ballerini told a packed Grand Ole Opry House Tuesday night, as the 25-year-old officially became its youngest member.

Earlier, CMA and ACM Entertainer of the Year Keith Urban gave his former tour mate his seal of approval by singing his hit, “Blue Ain’t Your Color.”

Earlier, Kelsea remembered the first time she walked onto the legendary stage, prior to her February 2015 debut.  “The curtain was down…” she told reporters, “and we walked in, and I looked…”

“I’m gonna cry! Oh God,” Kelsea interrupted herself. “I just walked in and did this,” she continued, wiping away tears.

The Knoxville native admitted she was “emotionally overwhelmed” at such a momentous night.

“Darius Rucker just tweeted me on the way in here, which is not casual,” she explained. “And then, Carrie’s inducting me tonight, which I don’t know if I’m supposed to say.  Sorry!” she said, laughing.

“I wouldn’t know what it looks like to be a female in country music without Carrie Underwood,” Kelsea added. “She’s the one for me that I’ve always looked up to.”

During Kelsea’s induction, Carrie summed up what the Opry means: “This is the heart and soul of country music,” she proclaimed, before the two duetted on Trisha Yearwood‘s “Walkaway Joe.”